The Inspirational Women in Law Awards seek to identify the trailblazers of the profession in the lead up to the centenary of the Sex Disqualification (Removal) Act 1919, which paved the way for women to practise law.

We are pleased to announce that this year’s Inspirational Women in Law Awards are now OPEN. You can find out more and enter by going to our sister organisation Next 100 Years’ page.

In 2019, we were delighted to hold the fourth edition of the awards with a marvellous ceremony taking place at County Hall on the 19th of November. This was generously hosted by Legal Week as part of their Women, Influence & Power in Law 2019 forum. The winners and finalists are featured below.

We want to say a massive thank you to all those who took part in the awards, including the winners, finalists, nominees and nominators. Your support has been invaluable to the awards and the project itself.

If you would like to view the picture from the awards ceremony, please head to this link. 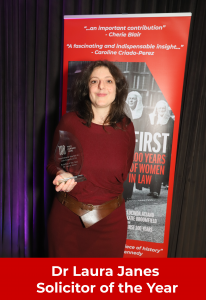 Laura is Legal Director of the Howard League for Penal Reform. With a doctorate in youth justice, she has expertise in representing children and young people in penal detention.

Laura was the driving force behind ‘Equal to Everything’ the illustrated children’s book about Lady Hale, which is now an Amazon bestseller for children’s books.

When asked what a role model means to her, Laura wrote “kindness often comes with bravery: daring to persevere through adversity when it would be easier to give up, daring to write about things that are personal and daring to continue to show kindness even when you are at the top of your profession despite the expectation to show a certain kind of (male) authority.” 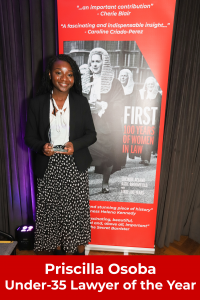 Under-35 Lawyer of the Year: Priscilla Osoba

Priscilla is a second year Trainee Solicitor at Burges Salmon. On the management committee of Burges Salmon’s BAME network BCultured, she was described by her nominator as extremely proactive, taking the lead on the network’s initiatives such as the launch of the South West Black Professionals Network.

When asked what a role model means to her, Priscilla wrote movingly of her grandfather, Saki Scheck, a lawyer and politician who campaigned for Ghanain independence. She wrote “what role models usually have in common is the resilience to overcome setbacks, the boldness to do things others hadn’t thought possible, and the vision to be their own role model when there was nobody else to look to.” 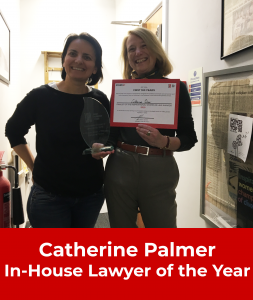 Catherine is general counsel of the luxury fashion brand and retailer Joseph. Her nominator described how Catherine has supported women lawyers throughout her career. As vice-president of the charity the Franco-British Lawyers’ Society, Catherine realised many French women lawyers put their careers on hold when they moved to London with their partners. She highlighted this issue and encouraged firms to support French-qualified female lawyers to qualify in England, as well as setting up the Prix Champagne Louis Roderer which is now in its fifth year.

When asked what a role model means to her, Catherine wrote about her grandmother, who was in the first generation of women admitted to Oxford and who she described as “quietly confident, determined and graceful”. 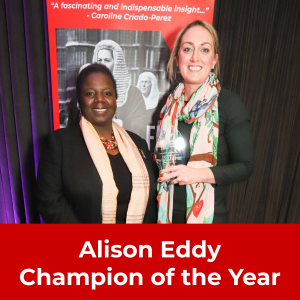 Champion of the Year: Alison Eddy

Alison Eddy is Managing Partner for the London office of Irwin Mitchell. She is a leading advocate of promoting a healthy work-life balance and flexible working and her nominator described the female friendly environment Alison has helped to create at Irwin Mitchell.

Fourteen years ago, Alison was the first Partner at Irwin Mitchell with team members working flexibly. Now, 43% of their employees work flexibly. Alison writes “for our wellbeing its essential we make time for ourselves, our family and friends. It’s not enough to talk about these values – we have to live them.”

Alison was unable to make it to the ceremony, and the award was accepted on her behalf by Anita Jewitt. 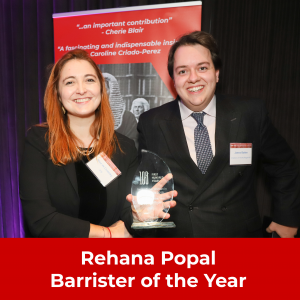 Barrister of the Year: Rehana Popal

A barrister at 10 King’s Bench Walk, Rehana was described by her nominator as consistently advocating for equal and fair treatment of disenfranchised groups in our society.

When asked what a role model means to her, Rehana wrote “Being a role model means being there. Being visible. Being uncompromisingly unashamedly authentic, fighting for the values you believe will make the world a better place for all.”

Rehana was unable to make it to the ceremony, but her win was celebrated by her friend and partner. 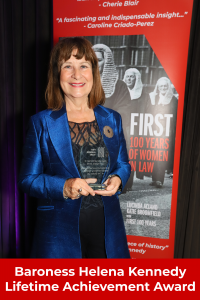 Helena is a barrister, author, broadcaster and member of the House of Lords. She has been a stalwart campaigner for equality in the legal profession for decades, writing and broadcasting on the discrimination women faced both as lawyers and as users of the law.

In 1992, her book Eve was Framed was published, which criticised the way women were treated by the British justice system. It led to a number of key reforms for women. In 2018, Eve was Shamed was published, detailing the continued ways which the legal system fails women and providing a sobering reminder of how far we still have to go before true equality is achieved.