The facts about women lawyers in fiction

Published 12th May 2020
The legal drama series, The Split returned to our screens for a second series in early 2020. First aired in 2018 to popular acclaim, it features a family of female lawyers set in the world of high-value divorces. The public seem to have an appetite for expensive breakups, fueled perhaps by press reports of London being the divorce capital of the world. The reason for this reputation is linked to the inspiration for the series itself – a real-life woman, Blanche Lucas one of the first  women  divorce lawyers in the UK. There is a long history of real women forming the basis of the portrayal of women lawyers in literature and popular culture, whereas there are no similar fictional depictions of real male lawyers. 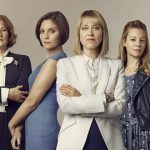 The cast of The Split
Writer of The Split, Abi Morgan says she  was inspired by the story of Blanche Lucas. Lucas was one of the most distinguished and inventive matrimonial lawyers of her generation.  She was made a partner in 1955 at a time when there were only 356 practicing women solicitors. She was one of the first divorce lawyers who gained fame for obtaining financial settlements which included maintenance, a share of the house, and a lump sum of money, as an acknowledgement of how much they may have given in a relationship to supporting a man’s career. She gained the sobriquet, of ‘Lump Sum Lucas’ for her ability to obtain substantial financial settlements for her clients, typically wives of very wealthy men. Born in Budapest in 1920, she worked as an interpreter during Second World War and won an Alexander citation for her services in helping to trace shot-down Allied airmen. She was described in her obituary in The Times as a magnificent woman, ‘an exotic femme fatale’ combining intelligence, warmth, striking looks, she was nearly six-foot tall, ‘wore high heels and big hair’ and had total fearlessness. 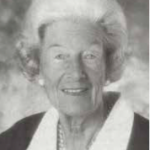 Blanche Lucas (1920 – 1994) was a partner at Theodore Goddard (now  Addleshaw  Goddard LLP) and also Vice President of the Marriage Law Reform Society.
Arguably the most famous lawyer woman in literature, is Portia in Shakespeare’s Merchant of Venice, who disguises herself as Balthazar, a young male ‘doctor of the law’ with her maid Nerissa, as her law clerk. Shakespeare was said to have been based upon Giustina Rocca an Italian woman in 1500 who was the first woman recorded as acting as a lawyer. 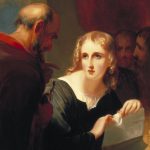 Shylock and Porzia (1835) by Thomas Sully

Portia depicted in the RSC, Merchant of Venice (2019)
The name of Portia has become synonymous with women lawyers and rather tediously dragged out in the press, novels and academic papers on women in law. It’s notable because of the very few examples of actual female lawyers historically. Portia’s character has to disguise herself by wearing men’s clothing, and this can be regarded as an apt metaphor for the way that many women lawyers have had to adopt the stereotypically-male masculine professional approach to their careers and this is a point made by respondents to the Law Society’s survey whereby a lot of women admitted they only reached senior positions by becoming “men-shaped women” – putting in the hours drinking, playing golf or enduring late working nights. 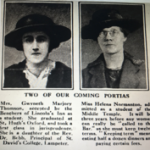 Two of our Coming  Portias  (Daily Graphic, 10 January 1920)
Portia is also the nickname given to  Phyllida Trant, the pupil in the famous Rumpole of the Bailey books by well-known author and playwright, John Mortimer, who was also a barrister. It’s not known whether Mortimer had anyone particular in mind but writing the novels as he did in late 1970s, a time of very few women at the Bar, they would have been very visible by their rarity and so significant that practicing male lawyers themselves were contributing to the Portia trope. 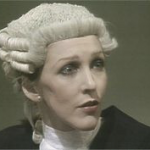 Patricia Hodge played Phyllida Trant in the TV adaptation of Rumpole of the Bailey 1978
Mortimer clearly knew something of the prejudice they faced as he writes in Rumpole  of the Bailey  (1978) when  Portia is first introduced to the protagonist, Horace  Rumpole, he is heard to observe, ‘Our old clerk Albert never wanted a woman in chambers. He said there wasn’t the lavatory accommodation.’ This experience was however true and many women lawyers have told their stories in the First 100 Years project that a persistent objection raised to their employment of women was the lack of facilities for women.
It had taken forty years of campaigning, culminating in the passing of The Sex Disqualification Removal) Act 1919 to force the profession to admit women as solicitors and barristers. But resistance and hostility were rife against the perceived invasion by women of the traditionally male profession. 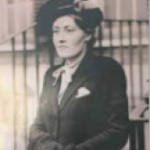 Hannah Margaret Cross (married name Wright) (1908– 2008), called to the Bar in 1931, was the first woman member of The Bar Council. She only managed to obtain pupillage by promising to use the public toilets in Lincoln’s Inn.
Aside from the very successful  Rumpole  series, there had been a notable earlier and very popular television series  Justice, which ran from 1969 – 1974 which starred Margaret Lockwood in the lead character role of Harriet Peterson, a barrister from the north of England. At that time there were only 147 women practicing barristers, some 6%. The portrayal of Harriet Peterson is reputedly based on Rose Heilbron, the first woman to achieve a first class honours degree in law at the University of Liverpool, the first woman to win a scholarship to Gray’s Inn, one of the first two women to be appointed King’s Counsel in England, the first woman to lead in a murder trial, defending a gangster in the notorious Cameo Cinema case the first woman recorder (part-time circuit judge) and the first woman judge to sit at the Old Bailey 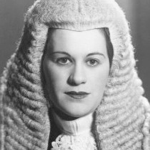 Dame Rose Heilbron QC, DBE (1914–2005), barrister and judge, a woman of many legal firsts
In the 1950s, Heilbron had become a household name was described in her guardian obituary as ‘a queen to her home city’ of Liverpool. Her successful criminal practice career was followed avidly in the press and so it’s not surprising that it could be fertile ground for a legal drama series. Cherie Blair CBE QC cites Harriet Peterson, (amongst other women lawyers) as one of her career inspirations. 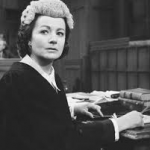 Margaret Lockwood  starring as  Harriet Peterson  in the television drama Justice (1969 – 1974)
A decade later, saw another woman barrister protagonist in the television series, Blind Justice in 1988 co-devised by Helena Kennedy and playwright Peter Flannery, based on Kennedy’s true-life legal experiences as a radical criminal barrister. The series features the cases of a group of radical barristers concerning human rights, race and politic issues and the conflict with the then Thatcher government and legal establishment of the 1980s. 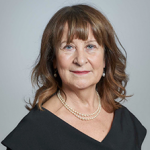 Baroness Helena Kennedy QC, barrister, author, lecturer, broadcaster and journalist
Baroness Helena Kennedy QC was born in 1950, brought up and educated in working-class Glasgow, and became a leading figure at the criminal bar dealing with many high-profile cases involving civil liberties. She became Baroness Kennedy of the Shaws, after the 1997 general election, using her platform to continue to hold government and authority to account. She has written from the outset of her career on the lack of opportunities for women lawyers to progress in their careers, on the structural inequalities of the legal system for women and on broader civil liberties and human rights issues. 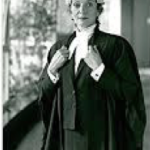 Jane Lapotaire as Katherine Hughes in Blind Justice (1988)
These dramas often show the women to have lives beyond the law, and a more direct representation of the barriers they face in the still male-dominated legal world. In a profession where women have struggled for equality of opportunity and career promotion to the top posts, to show high-achieving women lawyers in popular television series creates welcome visibility, but more potent is when the characters are based on real-life experiences.
———————————————————————————————————
First 100 Years a unique historical digital archive and national campaign to celebrate the stories about women who have shaped the legal profession since the Sex Disqualification (Removal) Act 1919 paved the way for female lawyers to practice. Our website has a unique timeline and there is more information in our podcasts series and book FIRST: 100 Years of Women in Law We welcome more stories about past and present women in law – contact the project through the website.
Written by Lucinda Acland, Project Team Member, co-author of FIRST: 100 Years of Women in Law and host of the First 100 Years Podcast.