15th November 2018
As part of the aims of the First 100 Years project, Spark21 held its fourth annual conference providing a cross-sector platform to debate ‘Levelling the Playing Field’.

Chaired by BBC journalist and presenter, Jo Coburn, who engaged us all with her insightful questions and interesting remarks throughout the day, the conference began with an inspiring speech from the Lord Chancellor on the need to tackle diversity at the top end of professions. With interesting questions from the audience about improving equality in the judiciary, legal aid and which woman in the law was his biggest inspiration, the Rt. Hon. David Gauke MP highlighted that a “truly diverse legal profession is crucial”. Read his full speech here. 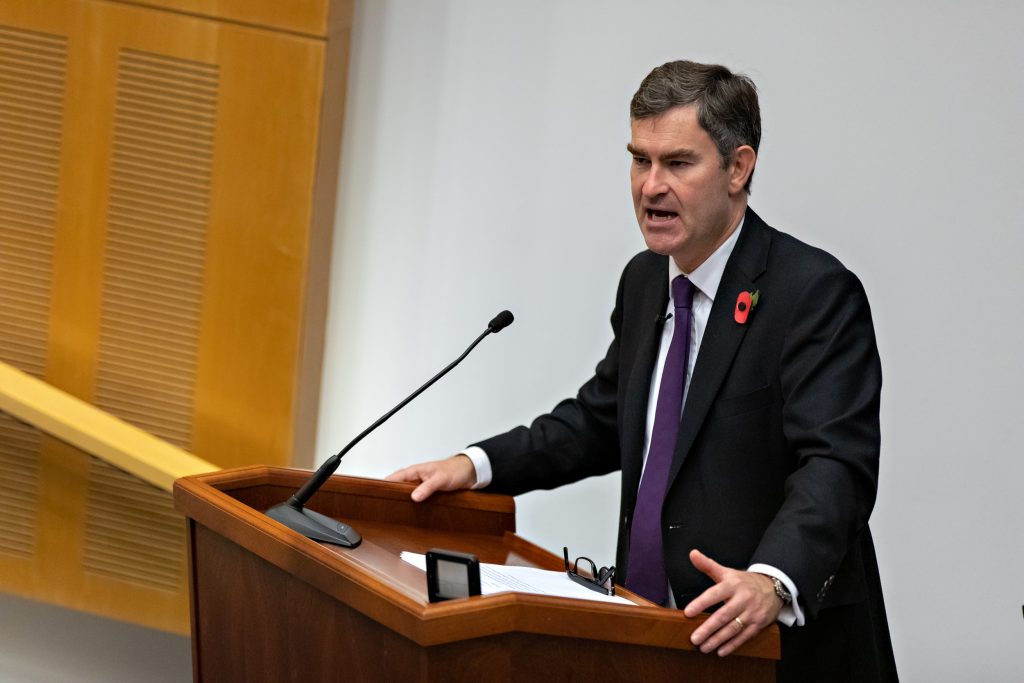 The first panel of the day explored gender equality on a broader scale, featuring prominent women from a variety of professional backgrounds, including a historian, a physicist, a photographer, a construction project surveyor and a barrister turned author. A highlight of the conference, this panel explored the successes and challenges in tackling gender equality throughout the professions. Dr Jess Wade, a physicist at Imperial College, discussed her Wikipedia campaign to increase the number of female role models in the STEM subjects and Leonora Saunders discusses the systemic patriarchy, misogyny and stereotyping that she sees through photographing women from a variety of professional backgrounds. 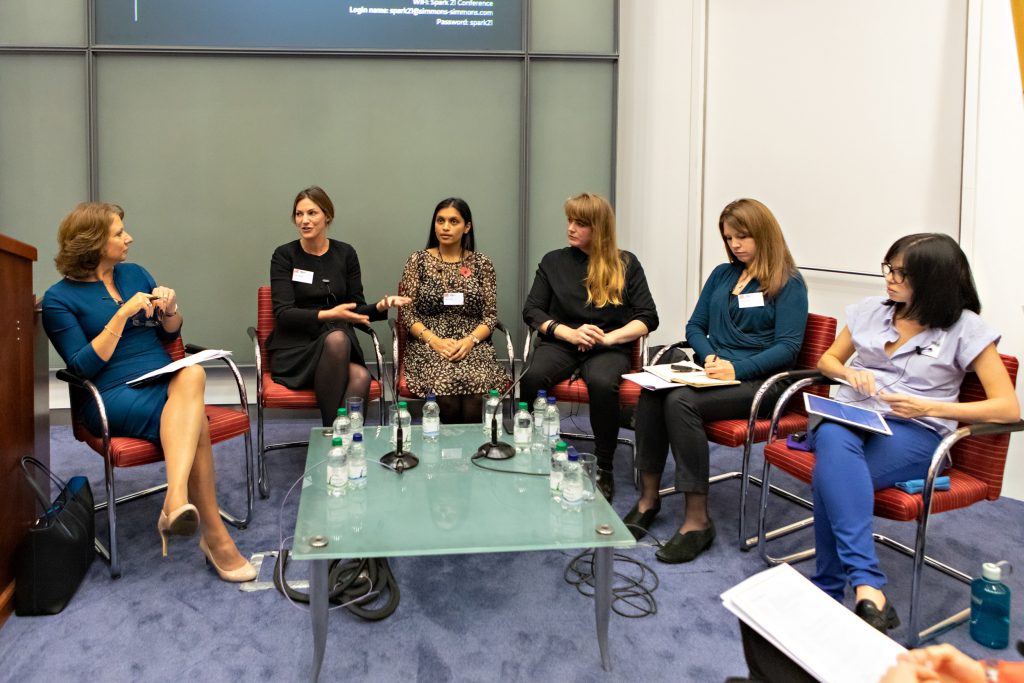 Dany Cotton, the Commissioner of the London Fire Brigade, wowed the audience with her tales of being a woman in the male dominated profession. She is the first female Commissioner and is one of the highest ranking firefighters in Europe. She was followed by Rowena Collins Rice, Director General of the Attorney General’s Office, who began her speech with a moving comment about her treatment at the hands of powerful men while working in the fire department, and applauded Dany Cotton for her work. She then went on to give a powerful speech about her career and, when asked what she would say to her younger self, answered that she would tell her to worry less and take any opportunities that came her way. After lunch, in which the conference all got to admire the ‘These Four Walls‘ portrait exhibition, it was on to the Networking Panel. Featuring mostly in-house lawyers from high profile organisations like Debenhams and Facebook, as well as a perspective from the Bar from Lucy Barbet, the panel explored the issues women face in networking and what needs to be done to improve this. This was followed up by David Roylance who gave a stirring presentation with tips on how to network better. The Leadership & Pay Panel was a hotly waited discussion, centering on issues that are very prevalent today. Harini Iyengar, of the Women’s Equality Party, highlighted the interesting policy of her Party that flexibility should be the default in all jobs to encourage equality in the genders. Helen Hancock of Simmons & Simmons discussed her rise to Partner level and how the legal profession still has a “macho city culture” which can be very confrontational. She also pointed out the “inner conversation” that women have, doubting their capabilities, that does not affect men in the same way. 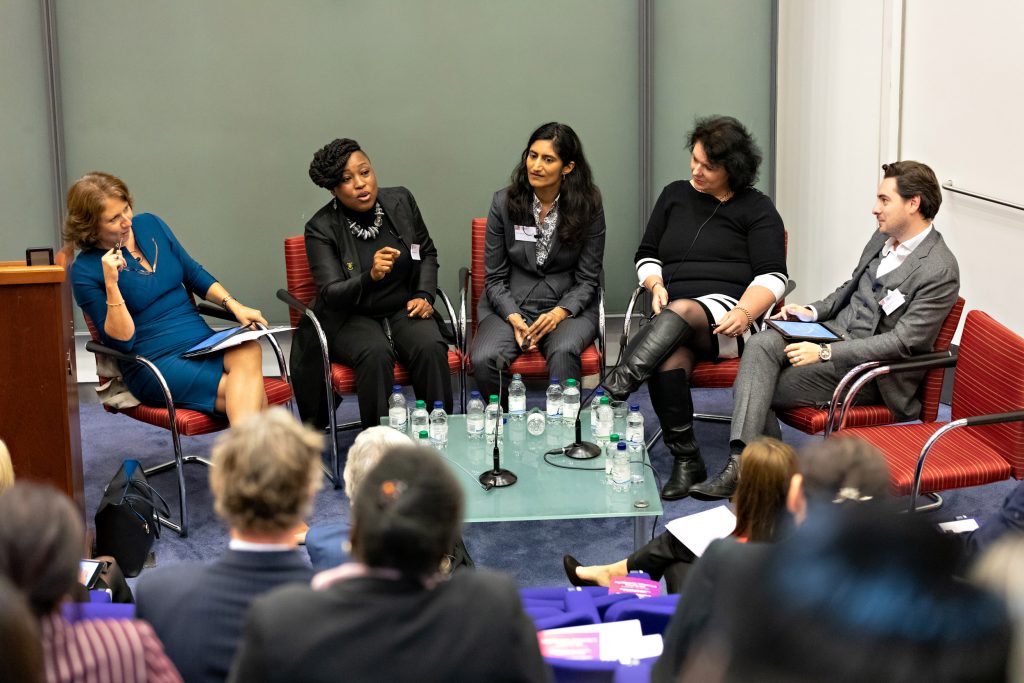 The Accessibility Panel featured women from a variety of backgrounds who had all succeeded in the law through non-traditional routes. From a former Chief Executive of the Magistrates’ Association, a legal apprentice, a CILEx graduate, a Project Manager and the founder of F-LEX, which provides students a way of gaining freelance experience as a paralegal, this discussion was a hugely inspiring one. Some of the students in the audience afterwards told First 100 Years how this had made them feel empowered that there were alternatives routes to working in the legal profession. Karen Whyte, who got the highest marks in the CILEx exams this year, claimed that as a single parent and having not gone to university, CILEx made an otherwise impossible dream of entering the legal profession an attainable one. 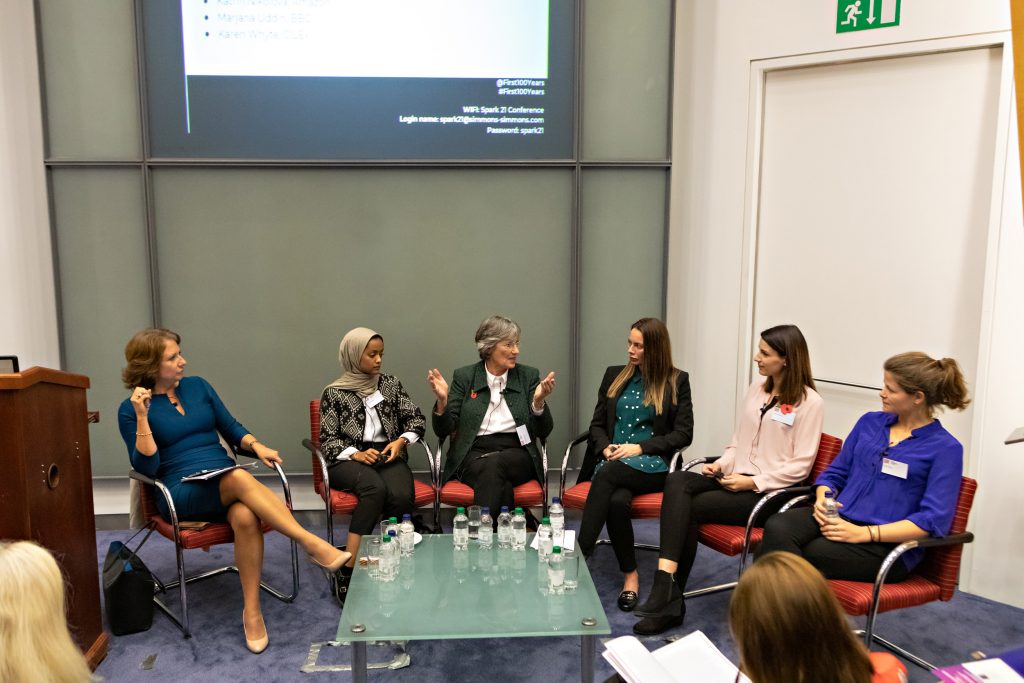 Jo Coburn facilitated an ‘In Conversation’ with Christina Blacklaws, President of the Law Society, and Amanda Pinto QC, future Bar Council Chair, in their responsibilities as leaders in the professional bodies and what their legacies will be. Christina highlighted that in large law firms, 85% of decision makers are men and she called on them to make a public commitment to bringing about a gender balance, and Amanda added that a key problem for women at the Bar is retention due to the self-employed nature of the Bar. 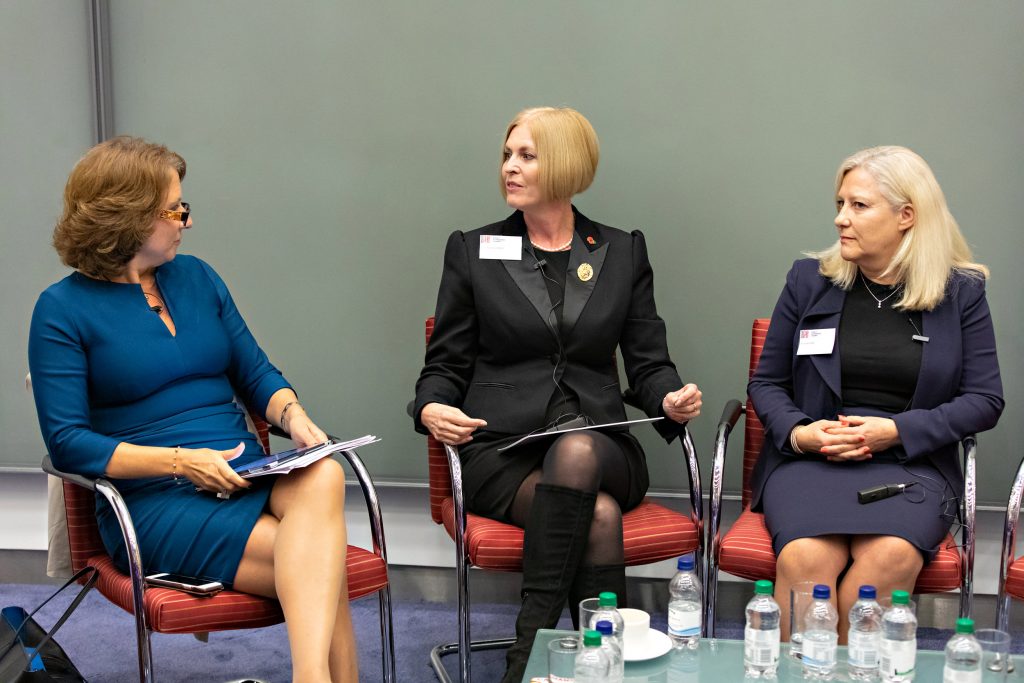 Rebecca Hilsenrath closed the day, quipping that she was all that stood between the audience members and the drinks reception. She left the audience feeling empowered with the advice not to apply for a job they can do as they’ll “get bored stiff”. Instead, she said to not be daunted by the intentionally off-putting language in a job advertisement but reach up to the next rung of the ladder and pull yourself up to success. 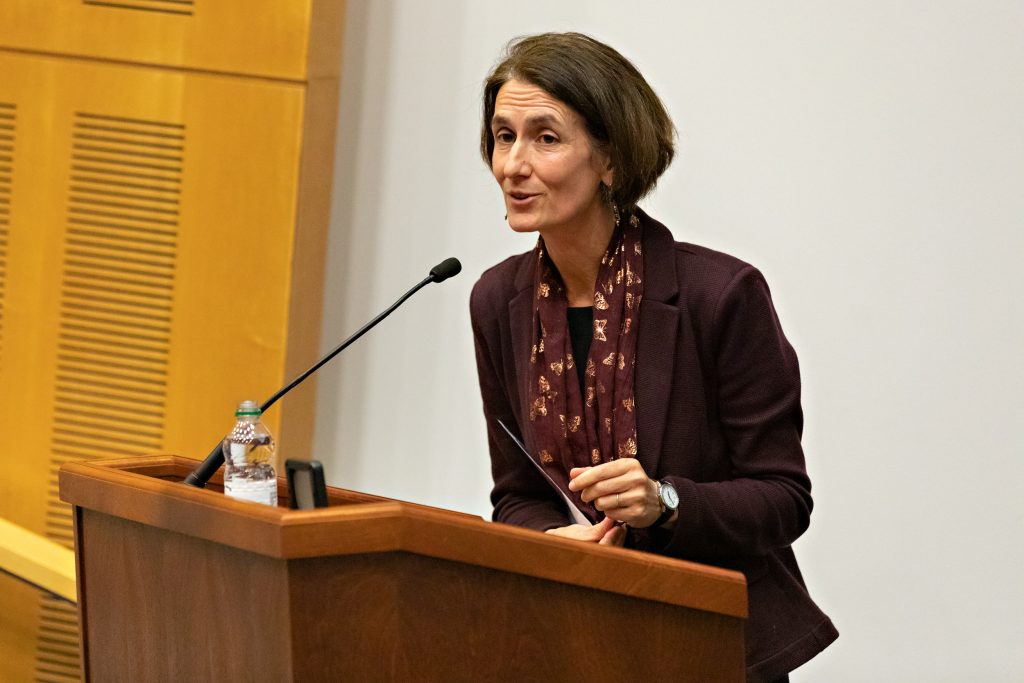 We would like to thank Simmons & Simmons for kindly hosting the conference and for the contributions of all the speakers who made the day such a success. Thank you also to the audience members for their insightful questions and engagement. 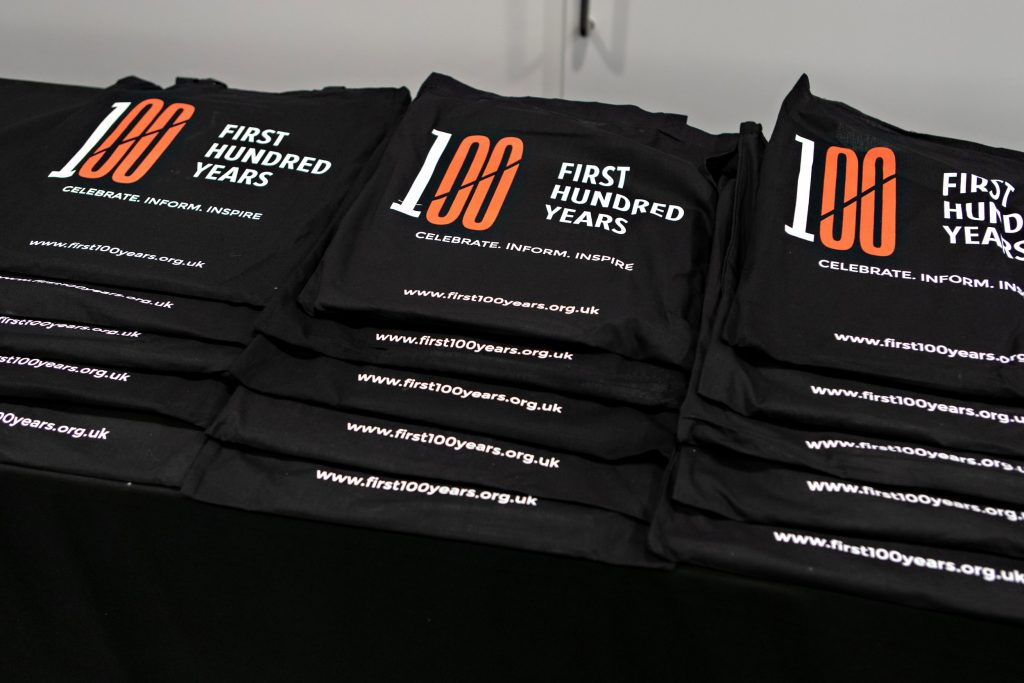 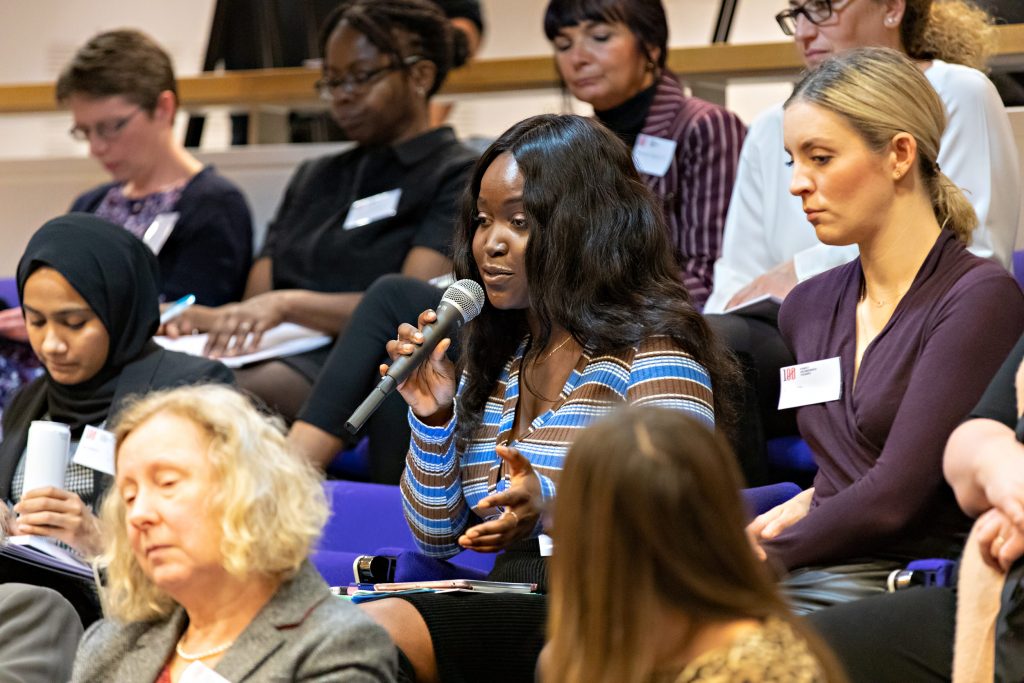 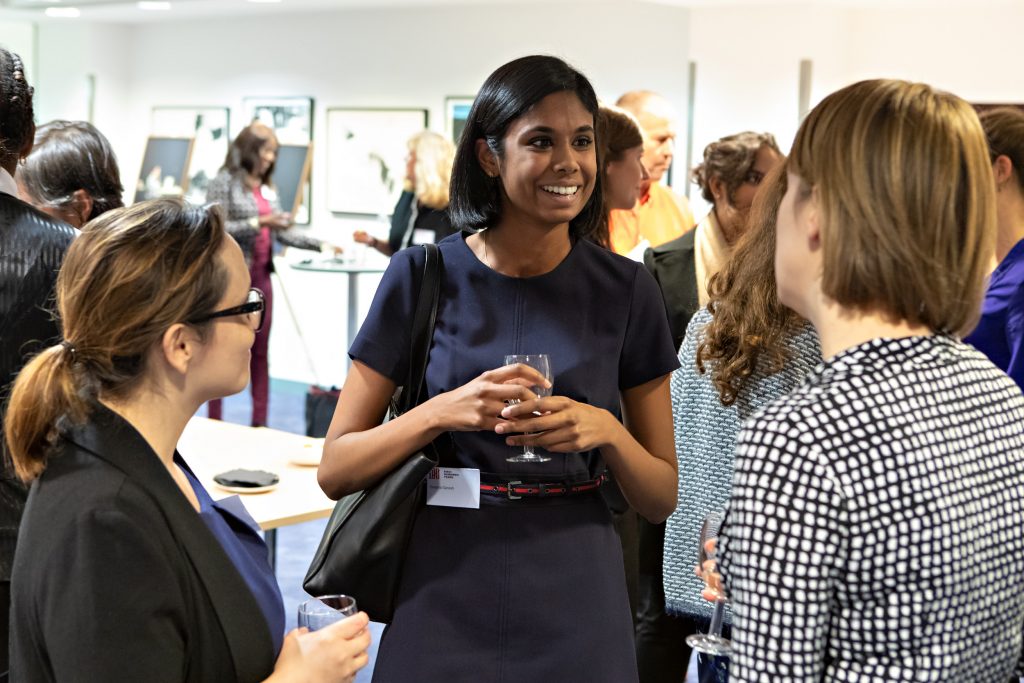 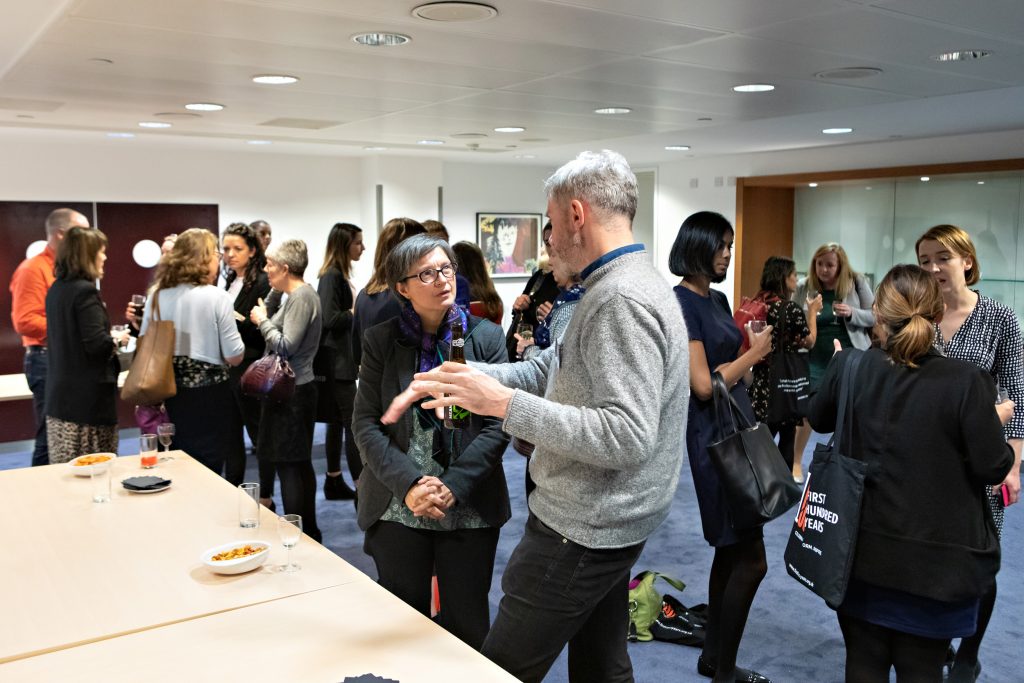 To get in touch, please email [email protected]

To see more coverage on the conference, see the links below: