Published 31st May 2018
The ‘rebel Countess’ Constance Markievicz née Gore-Booth was an Irish revolutionary, founding member of the Irish Citizen Army, suffragette and the first woman elected to the British House of Commons on the 28th December 1918, although she did not take her seat. She was also one of the first women in the world to hold a cabinet position as Minister for Labour of the first Dáil Éireann (Irish Parliament) in 1919. Ireland had to wait until 1979 for its second female cabinet minister.

Born in 1868 in London, Constance was the eldest daughter of Lady Georgina Gore-Booth and Sir Henry Gore-Booth, an Anglo-Irish landlord and Arctic explorer. The family lived at Lissadell estate in Co. Sligo, Ireland. She had a privileged childhood, educated by a governess and enjoying hunting and riding. In 1887, she was presented at court to Queen Victoria in her Jubilee year. However, the famine of 1879-1880 greatly coloured Constance’s views and left her with a great concern for the welfare of the poor. Her father provided free food for his tenants at Lissadell House, which inspired Constance and her sister, Eva. She also became interested in women’s suffrage as a young woman, presiding over a meeting of the Sligo Women’s Suffrage Society in 1896. 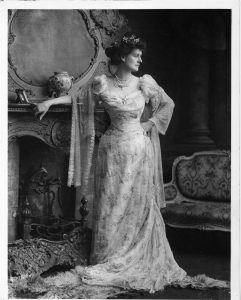 Constance Markievicz circa 1900
Constance trained as a painter at Slade School of Art in London, before continuing her studies in Paris at the Academie Julian. There, she met her future husband Casimir Markievicz, an artist from a wealthy Polish family. He was known as ‘Count Markievicz’, although there was some question over the validity of his title.

Constance and Casimir married in 1900, and in 1901 she gave birth to a daughter, Maeve, who was raised by the Gore-Booth grandparents at Lissadell. In 1903, Constance and Casimir moved to Dublin and began participating in its artistic scene which was going through something of a renaissance. They helped to found the United Arts Club in 1905. Although ostensibly apolitical, the club included many Irish nationalists including Douglas Hyde, who would go on to become the first President of Ireland. 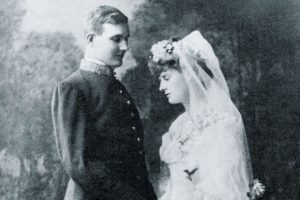 Through their artistic connections, Constance met revolutionaries including Maud Gonne, and her politics underwent gradual radicalisation. By 1908, she was active in nationalist politics and had joined Sinn Féin and Inghinidhe na hÉireann (‘Daughters of Ireland’), a revolutionary women’s movement founded by Maud Gonne. She also helped to found Bean na hÉireann (‘Women of Ireland’), Ireland’s first women’s nationalist journal. Constance and Maud also performed several plays at the Abbey Theatre, which highlights the relationship between Dublin’s flourishing cultural scene and burgeoning Irish nationalism.

In 1909, Constance co-founded Fianna Éireann (‘The Fianna of Ireland’), an Irish nationalist paramilitary youth organisation which trained teenage boys to use firearms, in preparation for a war of Irish independence. At its first meeting, she was almost expelled from the organisation for being a woman, but her co-founder Bulmer Hobson ensured she remained and she was elected to the committee.

In 1911, Constance was arrested for the first time for speaking at an Irish Republican Brotherhood demonstration which was protesting George V’s visit to Ireland. She handed out leaflets, threw stones at pictures on the King and Queen and attempted to burn the British flag. This only spurred her on, and she joined the socialist Irish Citizen Army (ICA), a volunteer force aimed at defending demonstrating workers from the police. She also designed their uniform and composed their anthem.

During the Dublin lock-out of 1913, an industrial dispute involving over 20,000 workers, Constance sold her jewellery in order to help pay for food to be distributed to the workers’ families. She also ran a soup kitchen for poor children. By this time, Casimir had moved back to Ukraine to become a war correspondent in the Balkans, although the separation was amicable and they continued to correspond.

When the First World War broke out in 1914, she was opposed to Irish involvement and co-founded the Irish Neutrality League. In the Easter Rising of 1916, Constance participated as part of the Irish Citizen Army. She was second-in-command of a troop at St Stephen’s Green, where according to one account, she shot a member of the Dublin Metropolitan Police who later died of his injuries, although this account is disputed. Her garrison held out for six days. During the surrender, Constance allegedly kissed her revolver before handing it to a British officer.

The rebels were taken to Dublin Castle and Constance was transported to Kilmainham Gaol. There, she was the only woman prisoner who was put in solitary confinement out of 70. From her cell, she could hear the firing squads executing other revolutionaries. She was the only woman to be court-martialed. During her court-martial on the 4th May 1916, she told the court “I went out to fight for Ireland’s freedom and it does not matter what happens to me. I did what I thought was right and I stand by it.” She was sentenced to death, but it was commuted to life imprisonment “solely and only on account of her sex”. When she heard she said, “I do wish your lot had the decency to shoot me.” 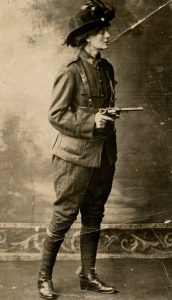 Constance was released from prison in 1917 after serving 13 months due to the British government granting a general amnesty for those who participated in the Easter Rising. Upon her release, she converted to Catholicism. However, she was jailed again in 1918 for anti-conscription activities.

While she was in Holloway Prison, Constance was elected for the constituency of Dublin St Patrick’s in the 1918 general election, with 66% of the vote. She was the first woman to be elected to parliament. However, along with the other 72 Sinn Féin MPs, she did not take up her seat because it involved swearing an oath of allegiance to the King.

Dr Mari Takayanagi, Senior Archivist at the Parliamentary Archives argues that Constance may not have been allowed to take up her seat in Parliament even if she had tried, because she was married to a Polish man and women took their husband’s nationality until 1948. She had also previously been found guilty of treason, which would have disqualified her. Despite this, her election wasn’t challenged, and her name is recorded in the Parliamentary Paper as an MP.

The Irish republicans set up their own provisional government, the Dáil Éireann, and Constance served as Minister for Labour from April 1919 to January 1922. She was the first Irish female Cabinet Minister. Constance remained a supporter of women’s rights; in March 1922 she delivered a speech in the Dáil in support of extending the electoral franchise on equal terms, saying “there has been less physical restraint on the actions of women in Ireland than in any other country, but mentally the restrictions seem to me to be very oppressive.”

Constance left the government in 1922 in protest of the Anglo-Irish treaty which she regarded as a betrayal. She completed a speaking tour of America and continued to campaign for the Republican cause. Her revolutionary views resulted in her being jailed again several times.

In 1926 she joined the new Fianna Fáil party and chaired its inaugural meeting. She was re-elected in 1927 but died in a public hospital ward before she could take her seat, of complications related to appendicitis. At her funeral, thousands lined the streets of Dublin to pay their respects.

Constance and her sister Eva were childhood friends with W. B Yeats, who wrote this poem “In Memory of Eva Gore-Booth and Con Markiewicz” about them:

Dear shadows, now you know it all,
All the folly of a fight
With a common wrong or right.
The innocent and the beautiful
Have no enemy but time;
Arise and bid me strike a match
And strike another till time catch;
Should the conflagration climb,
Run till all the sages know.
We the great gazebo built,
They convicted us of guilt;
Bid me strike a match and blow.