A Summer Celebration of Women in Law

28th July 2017
Almost 100 people joined us in celebrating the journey of women in law at the First 100 Years Summer Drinks on 27 July 2017. Hosted by Sidley Austin LLP at its beautiful office in the heart of London, guests were treated to an evening of insights into some of the inspiring female pioneers of the profession, thought-provoking exchanges on diversity and inclusion in the industry, and even a spot of sunshine on the rooftop patio. 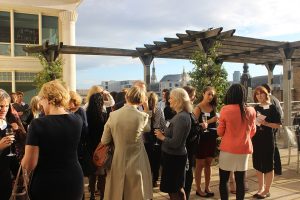 The evening began with a short video introducing to the objective of the First 100 Years project to commemorate the centenary of the Sex Disqualification (Removal) Act 1919, which allowed women to enter the legal profession. 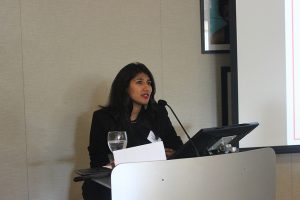 Fatema Orjela, First 100 Years champion and a partner at Sidley Austin, spoke about her role models in the legal profession. These included Cornelia Sorabji, the first woman to read law at Oxford University in 1892 but who could not receive her degree until 30 years later, and Gwyneth Bebb who went to the Court of Appeal to demand that the Law Society allow her and three other women to take the examination to qualify as solicitors. There was also Alice Bright, who became Sidley Austin’s first woman partner in 1956. Fatema noted that without these women pioneers challenging the status quo, her own career path would not have been as smooth-sailing. She had decided to champion the First 100 Years project so that she could keep up the momentum of the progress achieved by these outstanding women in law. 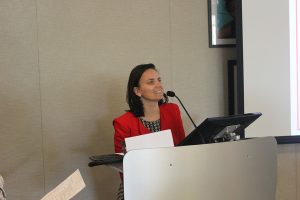 Dana Denis-Smith, creator of the First 100 Years, then took the stage to discuss the significance of the five year-endeavour (2014-2019) to collect and archive the stories of the women in law. Sharing that she was sometimes asked why anyone should bother about the history of women in law, Dana said her answer was simple. “History will judge us if we do not. The future generations need to know where we started.”
The First 100 Years is not just about looking back into the past but providing a new narrative on the history of women in law to shape the future. Dana noted that it had been a significant week for women in the profession. Baroness Brenda Hale’s appointment as the first woman Supreme Court president had coincided with another first, the appointment of Dame Jill Black to the Supreme Court bench, bringing the number of female judges in the highest court to two.
Such milestones should be celebrated. However, the announcements also underscored that there was still a long way to go in achieving gender equality in the legal profession. Dana said she looked forward to day when it had become so commonplace to have women judges in the Supreme Court that it would no longer be perceived as a newsworthy event.
The screening of Baroness Hale’s interview with the First 100 Years was well-received among the guests. Her candour in speaking about the women who inspired and supported her, the gender discrimination she faced in Cambridge University and throughout her career was both educational and refreshing.
To raise funds for the projects, the First 100 Years team held a silent auction featuring unique items and one-of-a-kind experiences. Participants were also invited to contribute to a collaborative video project, using the free app SeenIt Capture, to record their answers to questions on what the project meant to them and how they felt about Baroness Hale’s appointment. 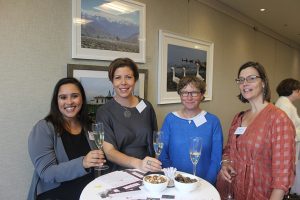 It was an enriching and meaningful evening that brought together like-minded individuals who wish to continue to drive change for women in the legal profession.