Published 1st June 2018
Margaret Owen OBE is a human rights barrister specialising in women’s rights. In an interview with First 100 Years, she discusses her varied career, founding the charity Widows for Peace Through Democracy, and her advice for young female lawyers today.

Margaret was born in 1932, the daughter of a solicitor and a doctor. She remembers her father as “a very good solicitor. We didn’t talk about human rights in those days, but that’s really what he was doing.” Her family on her mother’s side had come to England to escape pogroms in Lithuania. Despite her disadvantaged background, Margaret’s mother secured a scholarship to Cambridge and later became a doctor. She also helped to set up the National Marriage Guidance Council.

Margaret grew up in London but was evacuated during the war to the countryside, after a near miss with a German U-boat. “We were all about to go to America, but my elder brother said to his headmaster ‘Sir, I can’t leave my country when it’s at war’, so my mother cancelled the ship we were to go on. The ship was torpedoed, so the only reason I’m here now is because we didn’t get on that ship.”

Initially, Margaret wanted to become an actress. “I acted a great deal at school, but when I got to Cambridge I read law, because I saw myself as a sort of Portia, dispensing justice and the quality of mercy. I went up to Girton College in 1950, and there were only two women in the whole year reading Law at the time. There were no women law dons so all our supervisions were at other colleges.” Whilst at Cambridge, she continued to act alongside directors Peter Hall and John Barton, as well as Dadie (George) Rylands, the King’s Fellow and Shakespeare scholar, playing parts including Gertrude in Hamlet and Goneril in King Lear. “Maybe there’s something about advocacy and theatre which go together.” 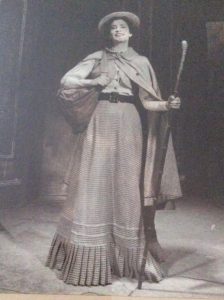 Margaret as Hilda Wangel in Ibsen’s ‘The Master Builder’.
After leaving Cambridge, she studied for the Bar, and completed her pupillage at 4 Paper Buildings in 1954, in the same chambers as Quintin Hogg, who received briefs from Margaret’s father. Her pupilmaster was Maurice Drake, who went on to become a High Court Judge. Margaret describes the atmosphere in chambers as “extremely difficult” for female barristers. “There were boys in the chambers who were going to get all the best work”, she recalls. “They were probably in their early forties, because the war meant that a lot of men had gone into the army, the navy and the air force. Then they came back, and they were already quite a lot older than us, so that made it extremely difficult for us to get briefs.”

Disillusioned, Margaret left the Bar for a time and got a job at the advertising agency J Walter Thompson when commercial television was in its infancy. “Lots of my friends were in advertising and everything seemed quite exciting, and I completely forgot I was a lawyer”, she recalls. In 1956 she moved to Granada Television, working on documentaries.

After marrying, Margaret started a degree in anthropology at Manchester under Max Gluckman. “I was always interested in how law impacted people, and how people, particularly the most vulnerable, could have a role in actually developing the law, implementing the law or monitoring its effects”, she explains. However, when her husband got a Chair at Imperial College they moved back to London and she completed a diploma in social administration at LSE in 1968, getting the only distinction of the year. Alongside her studies, she was also looking after their four children aged 1, 3, 5 and 7.

After she graduated, Margaret sat on a committee for the coordination of the welfare of Ugandan Asians after Idi Amin ordered their expulsion, and she travelled to India to write a report called ‘Stranded in India’ about the Ugandan Asians who were stranded in India. Later, she became senior counsel for the UK Immigrants Advisory Service as an immigration and asylum lawyer, travelling around the world and working on a diversity of cases, including Vietnam War draft avoiders in the US and Bangladeshi family reunion cases. When she left UKIAS, Margaret became head of law and policy at the International Planned Parenthood Federation (IPPF), the umbrella organisation for all the family planning associations. This involved travelling around the world to work on women’s sexual and reproductive health and rights, and the status of women generally.

In 1990, Margaret’s husband died. At the time she was teaching judicial administration to commonwealth magistrates and a Malawian magistrate asked Margaret to help a sick baby from Malawi. Margaret invited the baby and its mother to stay with her whilst the baby received treatment. Arriving at Margaret’s house, the mother said to her “You mean your husband’s brothers let you stay here and keep all these things?” This question prompted Margaret to research widow’s rights, and she discovered that there was no international organisation for widows.

Margaret went on to found Widows for Peace Through Democracy, a charity with ECOSOC status which campaigns for the rights of widows. “I was conscious of how many women are bereaved because of conflict, and how many women are wives of the missing or the disappeared. We need to have widows’ voices at peace accords.” While there have been improvements, she is concerned about the gap between the laws countries pass, and their implementation on the ground. “There’s a huge gap between the cup and the lip, these laws are not implemented, particularly in rural areas.”

In 2000, the UN passed Security Council Resolution 1325 which calls for a consideration of the needs of women and girls during conflict and requires parties in a conflict to prevent violations of women’s rights and to support women’s participation in peace negotiations. In response, Margaret helped to set up Gender Action for Peace and Security UK (GAPS-UK), which promotes and facilitates the meaningful inclusion of gender in the UK’s peace and security policies.

Margaret is also a Patron of Peace in Kurdistan and is passionate about promoting the rights of the Kurdish people who are one of the largest stateless groups in the world. She has visited the autonomous region of the Democratic Federation of Northern Syria (DFNS), known for its gender equality and democratic socialism, and she believes we can learn a lot from them. “There’s an incredible society there, every institutional organisation must have male and female co-chairs, even the army. They’ve done so much to reduce violence against women, it’s an incredible model.” She is also very concerned with the political situation in Turkey. Currently, over 70,000 university students are imprisoned in Turkey, and more professional journalists are detained there than any other country in the world. Margaret and regularly travels there to monitor trials and elections. 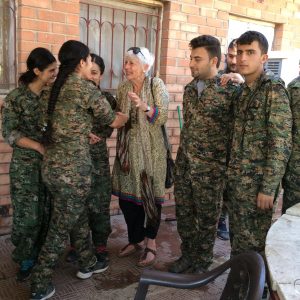 Margaret in the Democratic Federation of Northern Syria (DFNS) with the YPG and YPJ.
Margaret thinks to be a successful lawyer, you have to have “a passion for the truth, and a clarity of vision”, as well as powers of concentration. Does she think that the working environment has improved for female lawyers today? “In some ways it’s got better for women in law, but in other ways it is not. We may have more women in the Supreme Court now but compared to other countries we still have a low percentage of women in the judiciary. The UK also has the highest childcare costs in the whole of Europe, so it’s still difficult in terms of career gaps to get to the highest pinnacles of the profession along with men.” She’s also concerned about social mobility. “My grandchildren are paying a bomb to go to university, and so many internships are in London. How can people from disadvantaged families afford to do them?”

Her advice to young female lawyers is:


Just keep at it, and if you see any sort of prejudice or obstacle or unfairness in the way you are being treated, recruited or promoted, make a fuss. Speak out. Don’t let these things happen anymore. Don’t join the boy’s network, if you’re going to have a network make sure it’s really comprehensive and covers everybody irrespective or religion, ethnicity or class. Look after the other women around you, the women below you, and be sure you bring other women up with you.


Margaret is now a Door Tenant of 9 Bedford Row and she regularly writes for their international law blog. Aged 86, she is still passionate about speaking up about injustices, both at home and abroad. “I’m very glad to be a lawyer”, she says, “it is with my legal hat on that I feel I can wield some authority.”